Ireland Rugby team, the reigning grand slam champions, a series win in Australia and beating the All Blacks on home soil and their highest world ranking, not a bad 2018 in all. This incredible year leaves them with a target on their backs, they are the ones to beat.
In a year where the world cup is happening, this six nations bears more importance. Having crashed out of the last world cup in the quarter finals, strength in depth has been of paramount importance to Joe Schmidt and his coaching team. The provinces are providing such talent, that once shoo ins for the green shirt, are now facing a big fight to even be selected. 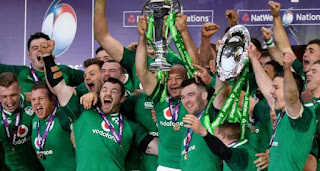 Leinster, the reigning European Champions, says it all, Munster, finding the form of old and a quarter final in Europe, Connacht are a new beast under Andy Friend, also qualifying for a quarter final, and finally Ulster. They have had a remarkable season compared to last year and have made the quarter final of Europe for the first time since 2014.

So where does Joe Schmidt even start? Captain Rory Best, of course, playmaker and World Player of the Year, Johnny Sexton and try scorer Jacob Stockdale are the first names on anyone’s team sheet.

There is fierce competition in every position and it’s driving standards higher and higher. However some decisions have been taken out of Schmidt’s hands. Beirne out injured, Henderson out injured, but with his record recovery time, don’t be surprised to see him feature in the Six Nations, and a slight injury crisis at 9, has opened the door for some new players to come in

One of the big decisions made by Schmidt was selecting Jack Carty over Ross Byrne. Both have been playing beautiful rugby for their respective clubs, Byrne deputising to none other than Johnny Sexton. This however might be the reason for his exclusion. Carty is a regular starter for Connacht and would have more minutes under his belt.

It’s likely Sexton will link up with half back partner Conor Murray again but will Carty be able to eclipse Joey Carberry who is on stellar form for Munster?
And who will be on the bench at scrum half, Ulster’s saviour John Cooney or uncapped Caolin Blade? And we may yet see Kieran Marimon into the squad for the later rounds after he had ankle surgery in November.

As well as Carty, Connacht have another two uncapped players, Caolin Blade and Tom Farrell included in the squad, showing just how well they have been doing this year.


The centre partnership will also present a welcome headache for Schmidt. Last year Chris Farrell, Garry Ringrose and Robbie Henshaw all fell foul to injury but all make a welcome return to this years squad alongside reliable Bundee Aki and versatile Will Addison who made his debut during the November window.

These 5 games give Schmidt a chance to test some different pairings ahead of the world cup with all providing plenty of reasons why they should be picked. Whether all make the world cup squad remains to be seen but it’s in their hands to make an impression.

The back three is almost nailed on to be Keith Earls, Rob Kearney and the player of last years Six Nations, Jacob Stockdale. Intercept tries were his forte last year but the chip and chase is becoming ever present in his game, and there was no bigger try than the match winning one against the All Blacks in November.

Ireland are in safe hands with these three controlling the back.

Moving to the pack, Tadhg Furlong has the number 3 shirt, while Jack McGrath and Cian Healy will fight it out for number 1. Hooker presents an interesting dilemma, Sean Cronin has been tearing up

trees for Leinster, he’s top try scorer in Europe alongside….Jacob Stockdale. However Rory Best, he’s the best. A well respected and admired captain, he’s brings a calmness and stability to any team. And has the respect of many a referee and fights for his team without crossing the line. At the end of the day, Best is the captain and more than likely to get the shirt but don’t be surprised to see Sean Cronin challenging Stockdale to be top try scorer again.

The second row was looking competitive but with injuries striking in the last round of Europe, James Ryan and Devin Toner will continue their Leinster partnership. There is no safer hands than Devin Toner in a line out and James Ryan is continuing to go from strength to strength at the tender age of 22.

The back row is where the fun lies. Conan, Murphy, O’Brien, O’Mahony, Ruddock, Stander and Van Der Flier. Any team would be lucky to have any of them. This is going to be a mammoth battle for the 6, 7 and 8 shirt. Conan dropped of Leinster’s match with Wasps with a shoulder injury so it remains to be seen will he be fit. In O’Mahony you have the most passionate man in an Ireland shirt and will fight till the bitter end for the shirt. Any combination of three will bring the intensity and accuracy that Schmidt demands of his players.

With Andy Farrell’s defence, and the high standards already set by the players and coaches, this Ireland team are going to take some beating. Wales could definitely push them hard and could be the banana skin for Ireland but under Schmidt, losing isn’t an option.

For the first time, Ireland could very well be back to back grand slam champions.