This weekend my beloved yet floundering Sale Sharks did the unt
hinkable.... left Kingsholm with 5 points and not allowing Gloucester a single one infront of a packed ground.

Great day, epic Gloucester Banter.. hospitable and full of jibes (except one fella behind me but the less said about him the better) as a whole it was a damn good day rugby aside.

A game with 6 tries and 2 yellow cards, spinkles of handbags and some good solid hard tackles (wonder how much abuse the man mountain Twelvetrees got in the changing room for being taken down by the tiny Faf De Klerk?) 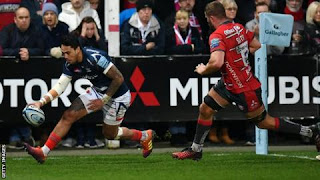 Faf was spectacular (as always) Webber had another stand out performance and I think we saw the best yet of O'Connor in a Sale shirt.  Sharples was very good, like Faf... as always but Gloucester at times looked uninspired.  Missing Cipriani maybe?

This really was the unthinkable Sale did, that much so I made a bet that if we won I'd semi streak... obviously I bottled it....

But, sadly.. like any normal Sale Sharks massive performance it's clouded.  We never get to revel in the victories and the good work our team do, the media and their anti Sale Sharks agenda makes sure this never happens.... yesterday was no different.


As Sale struggle for form, Steve Diamond continues to look out of touch with the modern game'

You can read it here

Yesterday was their first meeting since, during the press conference Peters apparently remained mute.  Diamond later questioned after he was advised about some negative tweets Sam Peters did regarding Sale and Steve Diamond during the game.  Diamond asked Peters why he remained so quiet when he usually has to much to say about him / Sale.  He then suggested they go into another room to discuss.... Peters recorded the altercation where Diamond (admittedly incorrectly) snatched the device from Peters.  At this point Peters goes to take back (wouldn't we all) Diamond asks him not to touch him again and for him to leave.. then Peters opens a tirade of abuse at Peters surrounded by people.  Repeatedly throwing F Bombs, repeatedly shouting down at him and calling him a bully.

This absolute monstrosity of a dick sizing competition ruined the game, ruined the massive achievement.  I spent my day saying my piece, I spend my life shouting from the rooftops about how fantastic Sale Sharks are now as a club.  I can't do it much longer.  The media need to be held accountable for the damage they do.  We now have a Rugby United account likening Steve Diamond to Harvey Weinstein.  ENOUGH!