Being part of the Young Rugby Ambassador Program gives young people (aged 14-25) the opportunity to gain recognition for their involvement in Rugby, primarily through the rewards that YRAs receive for the differing number of hours that they volunteer. Also, through the annual celebration event at Twickenham in which YRAs are invited to watch a game, have a two course meal and (of course) share their ideas with other YRAs to help grow and influence our game. There are also generally volunteer awards events led by each district that have a YRA category. 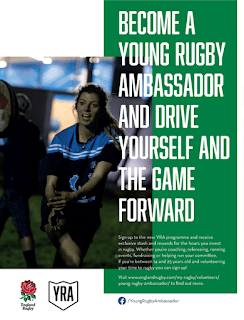 Through meetings, surveys and the work of the National Youth Council. YRAs have a chance to be part of a bigger movement that can influence the way the game is being taken forward. Being part of the YRA program reminds young volunteers in the game that their contribution to the game has a big impact. Rugby in England simply wouldn’t run without our masses of volunteers. Volunteering in rugby union provides lots of opportunity for young people to develop personally and professionally.
A little insight into my involvement in the YRA program. After a water polo injury in 2015, I helped my PE teacher coach the boy’s Rugby (I was unable to take part in the lessons myself). I then decided to take this further by helping to run Rugby practises at a lunchtime. The following season, I started coaching the Under 6s at my local Rugby club Old Rishworthians.
Those Under 6s are now Under 8s, I’m in my third season as a coach and a young Rugby ambassador with 300 hours of volunteering logged. Last season I was awarded with West Yorkshire’s YRA of the year. This was a huge honour and truly made me feel appreciated as coach in the Rugby community. This season I am coaching the Under 8s and Under 14s at Old Rishworthians, alongside all the girl’s teams at North Halifax Grammar School. I am an active member of my club and in the last 12 months I have shown this by: organising trips for the players, writing coaching manuals and taking a leading role in my clubs successful NatWest Rugby force application.
Looking forward I hope to take up coaching professionally. Currently I have my England Rugby Level 2, whilst at University I hope to obtain my Level 3. Currently I attend RFU CPD courses, as well as receiving incredible support from Premiership club Sale Sharks, through their amazing Coaching Development Courses.
I cannot express how highly I would recommend coaching or volunteering. It gave me a pathway back into sport from injury, but it’s also given me so much more. The feeling of seeing my players develop as players and people is indescribable. I can’t think of anything I’d rather do with my spare time.