Whoever wins the world cup in 2019 will need to have more than one brilliant number 10
To quote one of my favourite commentators, Jiffy, yesterday “that number 10 position will be crucial when they go to Japan”. The playmaker at #10 is a critical role, requiring intelligence with the boot, under the high ball and being able to see several plays ahead. The professional era has added more physicality requirement, in terms of both who they have to tackle and also the fact that the ever-bigger players on the opposing team deliberately target them for a clatter. Combine that with the punishing schedule of a world cup campaign, including the warmup matches, and we will see casualties. New Zealand is the most successful country in Rugby World Cup history and their strength in depth is legendary, but even they panicked in 2011 when they had to call up their gazillionth-choice fly half from a fishing trip for the World Cup final. They scraped the win, but it was certainly a final to forget.

ENGLAND
With his form at Welford Road, England were rightly confident in George Ford as their number 2 behind Owen Farrell who is hitting the form of his life. Ford may be a bit on the small side for the international game, but that wouldn’t matter against Japan would it? Unfortunately, it did and although his rugby skills were sound with reliable goal-kicking, it wasn’t until Farrell was brought on that Ford seemed to have the confidence to be the playmaker he can be. Which sort of defeats the objective of resting Farrell in the first place.
That doesn’t matter I hear you all cry – to quote Austin Healey from Friday night’s Gloucester game “Cipriani, Cipriani, Cipriani”. Noone is doubting Cipriani’s talent, but in the last 3-4 months alone, he’s spent a night in the cells and spent a few weeks banned following a red card. Eddie Jones was unequivocal in his view on Cipriani over the summer – if he could keep out of the headlines for non-rugby reasons, he stood a chance. To take England all the way in Japan, Jones can’t afford any non-playing drama in his squad and as such I don’t think talent is enough to make him a credible alternative to Farrell. In Pool C next year, Argentina and particularly France will target Farrell from the off. Jonny Sexton was forced from the field in four consecutive French fixtures, including a brutal bodycheck in the 2016 Six Nations by Yoann Maestri. Mathieu Bastareaud also has form here and he is ENORMOUS.

IRELAND
Speaking of Jonny Sexton – well, what a game he had on Saturday night. Still as physical in defence in the last 70 minutes as the first ten under Andy Farrell’s defensive masterplan, he would claim the No. 10 jersey in many people’s fantasy XV. But what happens when he needs to be rested? Lurking in his shadow is Auckland-born Joey Carbery, but at 22, Carbery is still a baby who hasn’t played enough to be a secure backstop for Sexton yet. He has only recently been getting proper game time at No. 10 since he moved from Leinster to Munster earlier this year. Come 2023, he may well be the No 10 they need, but Ireland should only be too aware what Sexton’s injury cost them in their QF exit at the hands of Argentina in 2015. I would hope they give Carbery more game time ahead of next year’s campaign, but it may be too little, too late.

WALES
Over in Cardiff, it was time for Gatland to test his strength in depth with a second string against Tonga. Tonga is not the opposition that New Zealand is, but it is certainly no weaker than Japan and one should never under-estimate Wales’ ability to be terrible against Tier Two nations in the Autumn Internationals. As I described last week, the gaps between all the teams are narrowing and nothing should be taken forgranted.
Well! The last couple of weeks have all been about ‘andsome Anscombe (also Auckland-born), setting up Davies and North against Scotland, and then his try-saving tackle on Kerevi last week showing what defence looks like. However, yesterday we had Dan Biggar with his first start of the Autumn series, clearly out to prove why he should be first choice. His textbook feigned pass early doors to be the first Welshman to touch the ball down was neat and effortless, and his kicking controlled and precise, particularly the chip-kick that Steff Evans collected for a try early in the second half. He was deservedly named the official Man Of The Match.
But wait! Who came on for him at the 60th minute, but our very own Ron Weasley, Rhys Patchell full of magic straight from Hogwarts. Within 3 minutes, he’d looped a beautiful pass to set up Wales’ sixth try, then less than 10 minutes later he opened up the Pacific like Moses commanding the Red Sea to run over half the length of the field to score the ninth. CARRIED AWAY MOMENT: LOOK AT ALL THIS FLY HALF TALENT! AND WALES CAN ATTACK AND DEFEND IN THE SAME SERIES!! WALES IS GOING TO WIN THE WORLD CUP!!!

SCOTLAND
Unfortunately for the supporters putting themselves at risk of hypothermia at Murrayfield, Scotland was unable to make it a clean sweep for the Home Nations. South Africa played a brutally physical game (captain Siya Kolisi was particularly brutal and could well be enjoying a period of ban-enforced rest quite soon) and while Scotland were never in the lead, it did feel as though they were desperately unlucky to lose the game. Hogg and Jones were in sparkling form, and Jones’ offload over his head without looking in the setup for Scotland’s first try made Cipriani’s passes look ordinary and boring.
The pack worked hard, although were always going to struggle against the mauraders from the south, but Fly Half Russell was inconsistent and unreliable between the two. He was unlucky to be targeted and clattered a few times, but his terrible cross-field kick donated possession to Willie le Roux to set up the first South African try and his wayward kicking then gave away possession twice more in the next ten minutes. His enormous drop goal attempt was heroic and only narrowly wide, so his resilience and gung-ho spirit is not up for debate. However, if I were Gregor Townsend and some of Russell’s colleagues, I’d be feeling pretty let down. Replacement fly-half Adam Hastings, like Ireland’s Joey Carbery, is very young and green, which showed shortly after he came on with a naïve penalty concession.

OTHER OBSERVATIONS FROM THE WEEKEND
* Argentina: they lost to Ireland last week and to France yesterday, but I still think they are showing a world of potential to be the Pool C bogeymen next year. They scored an early try, had most of the possession and were particuarly impressive at the lineout. Messiness meant too many penalties were conceded and France were finally able to break their run of defeats, but there’s plenty of time for Los Pumas to tidy up.
* Referees: I think Garces and Barnes are the best two in the world currently, so it’s been good to see them in the back-to-back New Zealand games. Barnes had a great game yesterday, his decisions on the pitch significantly wiser than his decisions about his facial hair. Even the NZ Herald who have dedicated many column inches to complaining about him gave him an honorable mention yesterday for his improvement to becoming one of the best. However, the fact he seemed to have left his cards at home did mean that some players on both sides who were up to no good were lucky not to have a ten-minute rest. Garces still edging it for me.
* Away kit at home: someone on Twitter tweeted asking why Wales were wearing away kit at home, so I replied suggesting that it was probably something to do with kit manufacturers wanting to sell it. I must say I don’t like it much though, home matches should mean home kit. Although if dressing like the All Blacks makes Wales capable of chucking 10 tries down, maybe I should be more for it.
* The Children In Need VT for Wales v Tonga was brilliant. A young girl called Megan with a twinkle in her eye said she would love to meet Leigh Halfpenny and you had to feel for her when she was presented with Ken Owens. “Life’s full of disappointments” my Kiwi husband said sagely, not knowing how true that was going to be a few hours later. But BBC pulled it out of the bag and Leigh H turned up at the end, and we all cried with her.
* International and premiership league clashes: I know, I know, ‘twas ever thus but the ties lose their lustre a bit when some teams have their full-strength XV and some don’t. It was particularly evident in Gloucester v Leicester where one of the commentators crowed about Gloucester “they know exactly where each other are and where they are playing”. Well so did Leicester – unfortunately a mixture of Twickenham and Cardiff, although that brings me onto my last carried away moment of the weekend…
* …what a debut for Jonah Holmes. Fabulous under the high ball from the outset and set up Liam Williams’ first try. AND HE’S THE SECOND STRING FULLBACK BEHIND HALFPENNY! WALES’ STRENGTH IN DEPTH IS AMAZING, THEY ARE GOING TO WIN THE WORLD CUP!!

MAN OF THE MATCH NOMINATIONS
* England v Japan: Jamie George – after a bit of a shocker last week and notwithstanding a trip to the bin, he played well in the loose, contributing to two tries and his tackle rate was immense.
* Wales v Tonga: Liam Williams – epic finishing for his own two tries, instrumental in several others and particularly effective in rushing through the Tongan defence so that they couldn’t organise themselves to stop the second half onslaught. A robust alternative to George North.
* Scotland v South Africa: Huw Jones – glossy ball handling, ~80 metres run, strong tackle rate, the only thing wrong with him is that with a name like that he should have been playing in Cardiff but you win some, you lose some.
* Ireland v New Zealand: James Ryan – as last week, the Irish second row continue to be a force to be reckoned with. At only 22, Ryan should be one for the future but he seems to have already arrived. 20 out of 21 tackles made against the World #1 team is outstanding.
* France v Argentina: Gael Fickou – some classy feet to hoodwink the Pumas midfield, topped off with some excellent ball handling and orchestrated Teddy Thomas’ first try.


AND FINALLY…
You’re never more than 6 feet away from an Irishman… especially when they’ve just won
Drowning his sorrows in our East Midlands social club, husband thought he’d be safe from marauding Irish celebrations. Unfortunately not, meet Clem everyone, who is here for the weekend visiting some family. 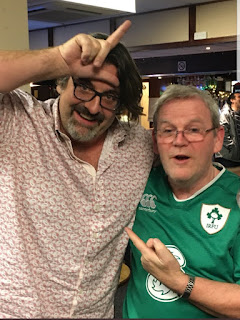