I used to hate rugby when I was a kid, but what I didn’t realise was how much of it permeated through my pores until I was infected. Infected with an absolute and complete love for a sport that I used to loathe.

And that was all thanks to my Dad.
He turned 70 at the start of the month and for his birthday I took him to see England V All Blacks at Twickenham Stadium, to say we were excited was an understatement! But I digress,more on that later…

As a child of divorce, my sister and I spent every other weekend with our Dad and from September until April time, we spent many years on a Saturday afternoon at Tring Rugby Club where he played.

Dad would “suit up”, the smell of Deep Heat wafting through from the changing room corridor that linked to the bar, where my sister and I amused ourselves playing on the bar stools pretending that were islands and the floor was the shark infested sea! These afternoons were fun and although our Dad was out on the pitch, I would watch through the clubhouse windows at him playing and enjoy the silliness of having the whole place to ourselves, just my sister and I.

The love I have for rugby never transferred to my sister, she likes football, (I know!!!???).  She appreciates my love for all things egg shaped and it proved useful in that there was no argument that the other All Blacks ticket would be mine!


I makes me smile now that when we go to watch my boyfriend play (yes, I ended up with a rugby player,he’s a prop!) that when we finish up in a clubhouse or pub, my two daughters have a glass of pop and a bag of salt and vinegar crisps.  It is like history repeating itself, I see in them myself and my younger sister enjoying the laughs and camradie as we used to when we were small.  I guess that is what stuck with me, even though my family was disjointeed, here we belonged, here we were safe, here were we protected and involved. That is rugby. Welcoming, fun, bonding and it forms long lasting relationships.

Fast forward many years to me now. No longer a little girl charging about a clubhouse while my Dad played.  My brothers played and my partner does, though I never did. Bad eyesight and not being able to wear contact lenses stopped that, but ,my love for rugby only grew. It appears, though I denied it, that it is in my blood, in my families blood.  My little girls now attend girls rugby training at Chesham Stags on a Sunday morning, and I fervently hope that their love of the game will grow and that being dragged to games when they were small will have had the same effect that it had on me, really not enjoying it, but without realising that it was seeping into to my very core, like the Deep Heat so liberally applied to the players of my Dad’s teammates during my childhood.

Little did I know that buying my first home would have the biggest impact on shaping my life with rugby now.  I was lucky enough to buy a new build flat at the bottom of Vicarage Road in my early 20’s and started going to Saracens games, well I could walk there, something to do on a Sunday afternoon!  I was hooked (or rehooked) and my love for the current Champions was firmly established, to this day they are my team, my boys, I really love my club, I bleed Black and Red (well definitely red!).  Back then, I had the biggest crush on Thomas Castaignede and had the embarressingly, cringeworthy chance to meet him once (that’s a story for another day!) but the fact these men were sweet, down to earth and friendly to their fans, only endeared me more to the sport.  These days it is harder to get near our sporting heroes, but it is still easier to mingle with rugby payers after a game than in many other sports (football, I’m looking at you here, sternly, over my glasses).

When I gave my Dad the All Blacks tickets, he cried.  It was a wonderfully emotional night, with cards and gifts, and being the lovely soppy ole chap he is, the tears were flowing as fast as the Prosecco!

On the 10th I collected Dad, all layered up with our new Eng V AB’s scarves and started the drive to Twickers.  The gorgeous sunshine was short lived as just before kickoff, during the anthems the heavens opened and it poured. It didn’t stop!  But who cares, we were there! It had been a dream of mine to see the All Blacks at Twickenham and we had made it.

I won’t comment on the game, the players, the ref or the TMO (I think we all know to what I am referring to here!) I want to comment on, belting out Jerusalem, sat with my Dad, necks craned to see the action at the other end of the pitch, screaming at tries, cheering and jumping like loons, shouting with excitement, him occasionally talking about the game and what was going on, but most importantly not explaining it to me, because he knew I understood. I will confess to not knowing many intricacies of our beloved game, but my Dad played he understands the game and to be acknowledged as someone that understands too, meant a lot.

Rugby is more than sport, it is family, community, friendship.  We all see the love and friendship that the players in our clubs have for each other, they have each others backs, we see it as they represent their countries. That wonderful moment with their arms around each other, lips wobbling at the National Anthem.  We are proud, we are with them, through the rain, the blood, the tries, the injuries.  This sport isn’t just skin deep, it’s in our bones! Through Twitter I have met people who support other clubs, who I now not only consider friends, but best friends. I have friends on twitter I have never even met, but have known for years, who are there for me, who chat with me, who DM me when I am sad. And that is all because of rugby.

Rugby has given me memories and friends I thought I would never have, it has shaped my life. 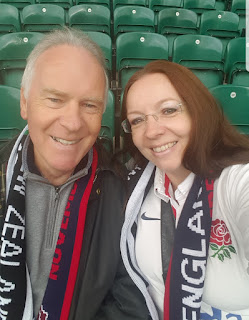